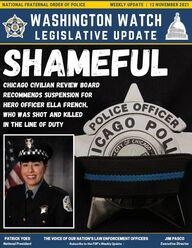 Executive Director Jim Pasco gave numerous media interviews inregard to criminal justice reform, the nationwide increase in violentcrime, and the issue of rogue prosecutors across the country failingto prosecute violent crimes.Executive Director Jim Pasco spoke with U.S. Associate AttorneyGeneral Vanita Gupta regarding criminal justice reform as well asissues pertaining to officers' due process rights.LEGISLATIVE NEWS & ACTIVITYExecutive Director Jim Pasco also gave numerous media interviewspertaining to the COVID-19 pandemic and vaccinations and theimpacts on public safety. The National FOP believes in the sciencebehind the COVID-19 vaccines and that vaccinations work to preventpeople from becoming infected by or transmitting COVID-19.However, the National FOP continues to believe that whether or not toaccept the vaccine is a personal decision.

The House considered and passed H.R. 3684, the "Investing in a NewVision for the Environment and Surface Transportation (INVEST) inAmerica Act," on a 228-205 vote. The legislation, which passed theSenate in August, will now be transmitted to the President, who isexpected to sign it into law this upcoming Monday. This infrastructurepackage would address provisions related to Federal-aid for highway,transit, highway safety, motor carriers, research, hazardous materials,and rail programs.The legislation would reauthorize surface transportation and waterprograms for five years, adding $550 billion in new spending. It also includes $110 billion for roads, bridges and major projects; $39billion for transit and $66 billion for rail; $65 billion for broadband;$65 billion for the electric grid; $55 billion to upgrade waterinfrastructure and $25 billion for airports. THIS WEEK IN WASHINGTONThe Senate was in a pro forma session this week.

LEGISLATIVE PRIORITIESThe "LEOSA Reform Act" would amend the Law Enforcement Officers' Safety Act(LEOSA), which exempts qualified active and retired law enforcement officers fromlocal and State prohibitions on the carriage of concealed firearms, to ensure thatthese officers are able to carry in the same venues as civilian concealed carrypermit holders in areas like schools and national parks, as well as use publictransportation and extends the exemption to magazine capacity and would allowactive and retired law enforcement officers to access services at U.S. post offices,Social Security Administration offices or Veterans Affairs facilities.COSPONSORS220COSPONSORS51521The "Protect and Serve Act" would make it a Federal crime to target a lawenforcement officer with an assault that results in seriously bodily harm or death.COSPONSORS23230COSPONSORS43485MORE RESOURCES ON OUR LEGISLATIVE PRIORITIESFULL LIST OF LEGISLATION SUPPORTED BY THE FOP

The Fraternal Order of Police is committed to improving theworking conditions of law enforcement officers and the safety ofthose we serve through education, legislation, information,community involvement, and employee representation. Our challenge to you is to have each and every FOP member inyour department, lodge, and State commit $5.00 a month to theNFOP PAC. Please contact the National Legislative Office to learnabout the various ways you can contribute to the NFOP PAC.The NFOP PAC is the power behindour organization's punch on CapitolHill, representing its members inthe most effective way possible. POLITICAL ACTION COMMITTEECAN YOU CHIP IN $5?DONATEClick Here