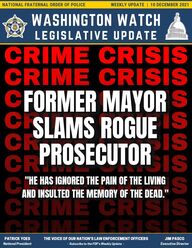 WEEKLY UPDATE | 10 DECEMBER 2021NATIONAL FRATERNAL ORDER OF POLICEFORMER MAYORSLAMS ROGUEPROSECUTOR"HE HAS IGNORED THE PAIN OF THE LIVINGAND INSULTED THE MEMORY OF THE DEAD."

LEGISLATIVE NEWS & ACTIVITYExecutive Director Jim Pasco also gave numerous media interviewspertaining to the COVID-19 pandemic, vaccinations, and their impact on publicsafety. The National FOP believes in the science behind the COVID-19vaccines and that vaccinations work to prevent people from becominginfected by or transmitting COVID-19. However, the National FOP continues tobelieve that whether or not to accept the vaccine is a personal decision. Executive Director Jim Pasco gave numerous media interviews in regard tocriminal justice reform, the nationwide increase in violent crime, and the issueof rogue prosecutors failing to prosecute violent offenders.Senior Legislative Liaison Tim Richardsonspoke with staff in the office ofRepresentative Andre D. Carson (D-IN)regarding H.R. 3079, the “Protect andServe Act.”Senior Legislative Liaison Tim Richardsonspoke with staff in the office of Senator R.Jon Tester (D-MT) regarding S. 744, the“Protect and Serve Act,” as well aspending nominations.

THE U.S. HOUSE OF REPRESENTATIVESTHIS WEEK IN WASHINGTONThe House considered and passed H.R. 4350, the “National DefenseAuthorization Act for Fiscal Year 2022,” on a 363-70 vote. This legislationwould authorize $768.1 billion in defense spending for fiscal year 2022. Thisauthorization measure will now go to the Senate, where it is expected to passat some point next week.The House considered and passed H.R. 2364, the “Synthetic Opioid DangerAwareness Act,” on a 411-14 vote. The legislation would require the U.S.Department of Health and Human Services (HHS) to provide education andtraining related to synthetic opioids, including fentanyl and its analogues. Thelegislation also directs HHS to produce training materials to prevent exposureto synthetic opioids for first responders and others who are at high risk ofsuch exposure and disseminate the materials to ambulance transportpersonnel, local sheriff deputies, and other first responders and individuals inhigh-risk occupations.The House Committee on the Judiciary marked up and favorably reportedH.R. 4977, the “Better Cybercrimes Metric Act,” by voice vote this week. Thelegislation, which the FOP supports, would encourage local and Federal lawenforcement agencies to report cybercrimes to the Federal Bureau ofInvestigation (FBI). The legislation will now go to the House floor for a fullvote.

THE UNITED STATES SENATEThe Senate considered and passed, on a 59-35 vote, a one-time measure tocreate a fast-track on the Federal debt limit increase. The ”ProtectingMedicare and American Farmers from Sequester Cuts Act,” S. 610, wouldallow the Senate to then pass, with a simple majority, legislation that wouldincrease the debt limit. U.S. Department of the Treasury Secretary JanetYellen has estimated that the debt limit will be reached by 15 December2021. This bill now heads to the President for signature. The Senate andHouse are expected to hold separate votes early next week on a bill thatwould increase the debt limit.THIS WEEK IN WASHINGTONThe Senate Committee on Rules and Administration held a hearing entitled“Oversight of the U.S. Capitol Police Following the January 6th Attack on theCapitol, Part II.” U.S. Capitol Police (USCP) Inspector General Michael Boltontestified and spoke to the USCP’s efforts to improve preparedness andprocedures to ensure the safety of those who work in and visit the Capitol.

TOP LEGISLATIVE PRIORITIESCOSPONSORS57240183H.R. 82The “Law Enforcement Officers’ Equity Act" would expand the definition of "lawenforcement officer" for salary and retirement benefits to include all Federal lawenforcement officers.The “Social Security Fairness Act” would repeal both the "Windfall EliminationProvision" and the "Government Pension Offset" in current Social Security law.The “Public Safety Employer-Employee Cooperation Act” would recognize the right oflaw enforcement and other public safety officers to bargain collectively with theiremployers.COSPONSORS92819H.R. 3225COSPONSORS110S. 1888NOT YET INTRODUCED IN THE SENATECOSPONSORS228161H.R. 962COSPONSORS43733S. 1302+2 NEW+2 NEW

LEGISLATIVE PRIORITIESThe "LEOSA Reform Act" would amend the Law Enforcement Officers' Safety Act(LEOSA), which exempts qualified active and retired law enforcement officers fromlocal and State prohibitions on the carriage of concealed firearms, to ensure thatthese officers are able to carry in the same venues as civilian concealed carrypermit holders in areas like schools and national parks, as well as use publictransportation and extends the exemption to magazine capacity and would allowactive and retired law enforcement officers to access services at U.S. post offices,Social Security Administration offices or Veterans Affairs facilities.COSPONSORS220S. 1610COSPONSORS51521H.R. 1210The "Protect and Serve Act" would make it a Federal crime to target a lawenforcement officer with an assault that results in seriously bodily harm or death.COSPONSORS23230S. 774COSPONSORS44495H.R. 3079MORE RESOURCES ON OUR LEGISLATIVE PRIORITIESFULL LIST OF LEGISLATION SUPPORTED BY THE FOP

PP CCThe Fraternal Order of Police is committed to improving theworking conditions of law enforcement officers and the safety ofthose we serve through education, legislation, information,community involvement, and employee representation. Our challenge to you is to have each and every FOP member inyour department, lodge, and State commit $5.00 a month to theNFOP PAC. Please contact the National Legislative Office to learnabout the various ways you can contribute to the NFOP PAC.The NFOP PAC is the power behindour organization's punch on CapitolHill, representing its members inthe most effective way possible. POLITICAL ACTION COMMITTEECAN YOU CHIP IN $5?DONATEClick Here