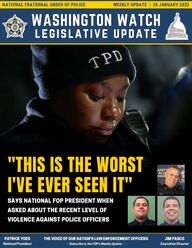 LEGISLATIVE NEWS & ACTIVITYNational Vice President Joe Gamaldi joined Fox News' America Reports todiscuss the surge in violence against law enforcement officers, noting thatlast year there were more than 360 police officers were shot nationwide, with63 of those officers being killed. Even worse, in 2021, ambush-style attackson police were up 115% from the year prior. National Vice President Joe Gamaldi joined Fox News' Harris Faulkner afterthe funeral service for fallen NYPD Officer Jason Rivera, who was ambushedand killed last week, along with his partner, to discuss the rise in attacks onlaw enforcement. National Vice President Gamaldi also called on Members ofCongress to support and pass H.R. 3079/S. 774, the "Protect and Serve Act,"which would make it a Federal crime to target a law enforcement officer withan assault that results in seriously bodily harm or death.

THIS WEEK IN WASHINGTONSupreme Court Justice Stephen G. Breyer announced this week that he isplanning to retire at the end of the court’s current term. Justice Breyer hasserved on the bench for nearly 30 years, after being confirmed in 1994 on an87-9 vote in the Senate.President Joseph R. Biden, Jr., is expected to nominate a successor in thenear future, which would lock up the empty seat for years to come. PresidentBiden presided over Justice Breyer’s confirmation as the Chairman of theSenate Committee on the Judiciary. This is the first time in U.S. history that asitting President would name the successor to a retiring justice that theyoriginally presided over.THE UNITED STATES SENATEThe Senate was in a pro-forma session this week.THE U.S. HOUSE OF REPRESENTATIVESThe House was in a pro-forma session this week.THE U.S. SUPREME COURT

TOP LEGISLATIVE PRIORITIESCOSPONSORS60246186H.R. 82The “Law Enforcement Officers’ Equity Act" would expand the definition of "lawenforcement officer" for salary and retirement benefits to include all Federal lawenforcement officers.The “Social Security Fairness Act” would repeal both the "Windfall EliminationProvision" and the "Government Pension Offset" in current Social Security law.The “Public Safety Employer-Employee Cooperation Act” would recognize the right oflaw enforcement and other public safety officers to bargain collectively with theiremployers.COSPONSORS92920H.R. 3225COSPONSORS121S. 1888NOT YET INTRODUCED IN THE SENATECOSPONSORS228664H.R. 962COSPONSORS43733S. 1302

LEGISLATIVE PRIORITIESThe "LEOSA Reform Act" would amend the Law Enforcement Officers' Safety Act(LEOSA), which exempts qualified active and retired law enforcement officers fromlocal and State prohibitions on the carriage of concealed firearms, to ensure thatthese officers are able to carry in the same venues as civilian concealed carrypermit holders in areas like schools and national parks, as well as use publictransportation and extends the exemption to magazine capacity and would allowactive and retired law enforcement officers to access services at U.S. post offices,Social Security Administration offices or Veterans Affairs facilities.COSPONSORS220S. 1610COSPONSORS53541H.R. 1210The "Protect and Serve Act" would make it a Federal crime to target a lawenforcement officer with an assault that results in seriously bodily harm or death.COSPONSORS23230S. 774COSPONSORS46515H.R. 3079MORE RESOURCES ON OUR LEGISLATIVE PRIORITIESFULL LIST OF LEGISLATION SUPPORTED BY THE FOP+1 NEW

P CThe Fraternal Order of Police is committed to improving theworking conditions of law enforcement officers and the safety ofthose we serve through education, legislation, information,community involvement, and employee representation. Our challenge to you is to have each and every FOP member inyour department, lodge, and State commit $5.00 a month to theNFOP PAC. Please contact the National Legislative Office to learnabout the various ways you can contribute to the NFOP PAC.The NFOP PAC is the power behindour organization's punch on CapitolHill, representing its members inthe most effective way possible. POLITICAL ACTION COMMITTEECAN YOU CHIP IN $5?DONATEClick Here