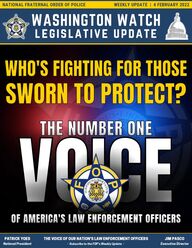 THE U.S. HOUSE OF REPRESENTATIVESTHIS WEEK IN WASHINGTONThe House Committee on Judiciary’s Subcommittee on Crime, Terrorism,and Homeland Security held a hearing entitled “Oversight of the FederalBureau of Prisons." Providing testimony at this hearing was Director MichaelCarvajal of the Federal Bureau of Prisons.The House Committee on Homeland Security held a hearing entitled "TheDynamic Terrorism Landscape and What it Means for America." This hearingtouched on domestic terrorist threats and the increasing development of anti-sematic attacks.

THIS WEEK IN WASHINGTONIt was announced late Wednesday that Senator Ben Ray Lujàn (D-NM)suffered a stroke and underwent a successful decompressive surgery.Senator Luján’s staff have announced that the Senator will be out for 4 to 6weeks, but thankfully, he is expected to make a full recovery. THE UNITED STATES SENATEThe Senate Committee on Homeland Security and Governmental Affairsadvanced on a 7-4 vote the nomination of Sheriff Ed Gonzales as Director ofthe U.S. Immigration and Customs enforcement (ICE). The nomination willnow advance to the Senate floor. Sheriff Gonzalez has received criticism inthe past for being openly critical of ICE. If confirmed, this would be the firsttime in 5 years that the agency has had a Senate confirmed director.The Senate Committee on Commerce, Science, and Transportation held anexecutive session on numerous nominations. Gigi Sohn, President Biden’snominee for the Federal Communications Commission (FCC), was pulledprior. The National FOP opposes the nomination of Ms. Sohn because, as aboard member for Electronic Frontier Foundation (EFF), she was part of aforceful advocacy campaign promoting end-to-end encryption and opposing“lawful access” by law enforcement digital evidence. These new encryptionmethods are causing law enforcement agencies to rapidly lose the capabilityto obtain digital evidence necessary to protect the public from crime andviolence.

TOP LEGISLATIVE PRIORITIESCOSPONSORS60247187H.R. 82The “Law Enforcement Officers’ Equity Act" would expand the definition of "lawenforcement officer" for salary and retirement benefits to include all Federal lawenforcement officers.The “Social Security Fairness Act” would repeal both the "Windfall EliminationProvision" and the "Government Pension Offset" in current Social Security law.The “Public Safety Employer-Employee Cooperation Act” would recognize the right oflaw enforcement and other public safety officers to bargain collectively with theiremployers.COSPONSORS92920H.R. 3225COSPONSORS121S. 1888NOT YET INTRODUCED IN THE SENATECOSPONSORS228664H.R. 962COSPONSORS43733S. 1302+1 NEW

LEGISLATIVE PRIORITIESThe "LEOSA Reform Act" would amend the Law Enforcement Officers' Safety Act(LEOSA), which exempts qualified active and retired law enforcement officers fromlocal and State prohibitions on the carriage of concealed firearms, to ensure thatthese officers are able to carry in the same venues as civilian concealed carrypermit holders in areas like schools and national parks, as well as use publictransportation and extends the exemption to magazine capacity and would allowactive and retired law enforcement officers to access services at U.S. post offices,Social Security Administration offices or Veterans Affairs facilities.COSPONSORS220S. 1610COSPONSORS53541H.R. 1210The "Protect and Serve Act" would make it a Federal crime to target a lawenforcement officer with an assault that results in seriously bodily harm or death.COSPONSORS23230S. 774COSPONSORS48535H.R. 3079MORE RESOURCES ON OUR LEGISLATIVE PRIORITIESFULL LIST OF LEGISLATION SUPPORTED BY THE FOP+2 NEW

FOP NEWSROOMThe National Fraternal Order of Police reportsthat as of midnight on 31 January, there havebeen 30 officers shot in the line of duty so farin 2022 (+67% from 2021 YTD)... MOREWidow of NYPD officer Jason Rivera blastsAlvin Bragg in moving eulogy [NY Post]As the largest and oldest law enforcementlabor organization in the United States, we'reproud to be the Number One Voice of America'sLaw Enforcement Officers... MOREWho's Fighting for You? The FraternalOrder of Police Will Always Fight for OurMembersIn a growing number of American cities, if youcall the police, there are fewer officers takingthe call... MOREWhy police forces are struggling torecruit and keep officers [CNN]Patrick Yoes, National President of theFraternal Order of Police, called out WhiteHouse Press Secretary Jen Psaki for mockingand belittling Americans’ concerns about thenation’s skyrocketing crime rates... MOREFOP National President Calls Out JenPsaki

POLITICAL ACTION COMMITTEECAN YOU CHIP IN $5?DONATEClick HereThe Fraternal Order of Police is committed to improving the workingconditions of law enforcement officers and the safety of those weserve through education, legislation, information, communityinvolvement, and employee representation. The National FOP PAC is the power behind our organization's punchon Capitol Hill, representing its members in the most effective waypossible.Our challenge to you is to have each and every FOP member in yourdepartment, lodge, and State commit $5.00 a month to the NFOPPAC. Please contact the National Legislative Office to learn aboutthe various ways you can contribute to the NFOP PAC. DONATEClick Here