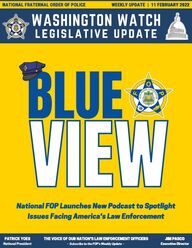 LEGISLATIVE NEWS & ACTIVITYNational President Patrick Yoes sat down with Executive Director Jim Pascofor the first episode of the National FOP's new podcast, Blue View, to discusswhat is being done in Washington, D.C. to reform policing so that thepartnership between our communities and the officers that protect them canbe restored. New episode will drop this TuesdayMAKE SURE TO SUBSCRIBE!National President Patrick Yoes gave numerous media interviews in regard tolaw enforcement line-of-duty deaths, the crime wave many cities acrossAmerica are experiencing, as well as the COVID-19 pandemic.

THE U.S. HOUSE OF REPRESENTATIVESTHIS WEEK IN WASHINGTONThe House Committee on Science, Space, and Technology held a hearingentitled "Data Challenges Impacting Human Trafficking Research andDevelopment of Anti-Trafficking Technological Tools." Providing testimonywas Director of the U.S. Government Accountability Office Dr. GrettaGoodwin, among representatives of selected human rights organizations.The House Committee on Homeland Security held a joint hearing entitled"The Nonprofit Security Grant Program and Protecting Houses of Worship: AView from the American Jewish Community." This hearing addressedviolence and anti-Semitic sentiments that have created challenges for lawenforcement. The House passed H.R. 6617, the "Further Additional Extending GovernmentFunding Act," on a 272-162 vote. This bill would provide funding for Federalagencies at the current Fiscal Year 2022 levels. Congress is facing an 18February deadline, and if a measure is not passed, then Federal funding foragencies would run out, resulting in a government shutdown. This fundingmeasure would last through 11 March. The measure will now head over to theSenate for a floor vote early next week.

THIS WEEK IN WASHINGTONTHE UNITED STATES SENATEThe Senate Committee on Commerce, Science, and Transportation held anexecutive session on the nomination of Gigi B. Sohn, President Biden’snominee for the Federal Communications Commission (FCC). The NationalFOP opposes the nomination of Ms. Sohn because, as a board member forElectronic Frontier Foundation (EFF), she was part of a forceful advocacycampaign promoting end-to-end encryption and opposing “lawful access” bylaw enforcement . These new encryption methods are causing lawenforcement agencies to rapidly lose the capability to obtain digital evidencenecessary to protect the public from crime and violence. The Senate Committee on Judiciary held a markup of S. 3538, the"Eliminating Abusive and Rampant Neglect of Interactive Technologies (EARNIT) Act." This bill, which is supported by the FOP, would establish a NationalCommission on Online Child Sexual Exploitation Prevention in an effort tocombat the sexual exploitation of children on the Internet. This legislationadvanced through the committee on a voice vote and will now head to theSenate floor.

TOP LEGISLATIVE PRIORITIESCOSPONSORS62251189H.R. 82The “Law Enforcement Officers’ Equity Act" would expand the definition of "lawenforcement officer" for salary and retirement benefits to include all Federal lawenforcement officers.The “Social Security Fairness Act” would repeal both the "Windfall EliminationProvision" and the "Government Pension Offset" in current Social Security law.The “Public Safety Employer-Employee Cooperation Act” would recognize the right oflaw enforcement and other public safety officers to bargain collectively with theiremployers.COSPONSORS93021H.R. 3225COSPONSORS121S. 1888NOT YET INTRODUCED IN THE SENATECOSPONSORS228664H.R. 962COSPONSORS43733S. 1302+4 NEW+1 NEW

LEGISLATIVE PRIORITIESThe "LEOSA Reform Act" would amend the Law Enforcement Officers' Safety Act(LEOSA), which exempts qualified active and retired law enforcement officers fromlocal and State prohibitions on the carriage of concealed firearms, to ensure thatthese officers are able to carry in the same venues as civilian concealed carrypermit holders in areas like schools and national parks, as well as use publictransportation and extends the exemption to magazine capacity and would allowactive and retired law enforcement officers to access services at U.S. post offices,Social Security Administration offices or Veterans Affairs facilities.COSPONSORS220S. 1610COSPONSORS53541H.R. 1210The "Protect and Serve Act" would make it a Federal crime to target a lawenforcement officer with an assault that results in seriously bodily harm or death.COSPONSORS23230S. 774COSPONSORS59656H.R. 3079MORE RESOURCES ON OUR LEGISLATIVE PRIORITIESFULL LIST OF LEGISLATION SUPPORTED BY THE FOP+12 NEW

POLITICAL ACTION COMMITTEECAN YOU CHIP IN $5?DONATEClick HereThe Fraternal Order of Police is committed to improving the workingconditions of law enforcement officers and the safety of those weserve through education, legislation, information, communityinvolvement, and employee representation. The National FOP PAC is the power behind our organization's punchon Capitol Hill, representing its members in the most effective waypossible.Our challenge to you is to have each and every FOP member in yourdepartment, lodge, and State commit $5.00 a month to the NFOPPAC. Please contact the National Legislative Office to learn aboutthe various ways you can contribute to the NFOP PAC. DONATEClick Here