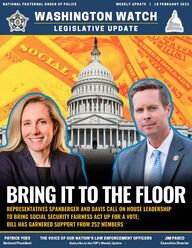 THE U.S. HOUSE OF REPRESENTATIVESThe House Committee on Judiciary's Subcommittee on Crime, Terrorism,and Homeland Security held a hearing entitled "The Rise in Violence AgainstMinority Institutions." This hearing touched on the increase of domesticthreats against minority communities, including the recent Colleyvillesynagogue hostage situation.The House was in a pro-forma session this week.The House Committee on Judiciary's Subcommittee on Transportation andMaritime Security held a hearing entitled "Concealed Carry-ons: Confrontingthe Surge in Firearms at TSA Checkpoints." This hearing discussed theincrease of firearms during the boarding of flights, and the challenges thispresents law enforcement. Providing testimony at the hearing was Chief ofPolice Jason D. Wallis from the Port of Portland.Representatives Rodney L. Davis (R-IL) and Abigail A. Spanberger (D-VA) senta joint letter to the U.S. House of Representatives leadership urging them tobring forward H.R. 82, the "Social Security Fairness Act" to the House floor fora vote. This legislation would eliminate both the Windfall Elimination Provision(WEP) and the Government Pension Offset (GPO), two provisions of the SocialSecurity Act that unfairly reduce or eliminate Social Security benefits formillions of Americans who have devoted much of their careers to publicservice. Click here to read the letter.

THE UNITED STATES SENATEThe Senate passed H.R. 6617, the "Further Additional Extending GovernmentFunding Act" on a 65-27 vote. This bill, which passed the House the weekprior, provides funding for Federal agencies at the current Fiscal Year 2022levels. Congress was facing a 18 February deadline, and if the measure wasnot passed, then Federal funding for agencies would have run out. This wouldhave resulted in a government shutdown. This funding measure will lastthrough 11 March. The measure will now head to President Biden's desk to besigned into law. Congress will now return to working on a full-year spendingpackage.The Senate Committee on Judiciary held a hearing on numerous judiciarynominations. These nominations were carried over and will be voted on at alater date.

COSPONSORS62252190H.R. 82The “Law Enforcement Officers’ Equity Act" would expand the definition of "lawenforcement officer" for salary and retirement benefits to include all Federal lawenforcement officers.The “Social Security Fairness Act” would repeal both the "Windfall EliminationProvision" and the "Government Pension Offset" in current Social Security law.The “Public Safety Employer-Employee Cooperation Act” would recognize the right oflaw enforcement and other public safety officers to bargain collectively with theiremployers.COSPONSORS93021H.R. 3225COSPONSORS121S. 1888NOT YET INTRODUCED IN THE SENATECOSPONSORS228664H.R. 962COSPONSORS43834S. 1302+1 NEW+1 NEW

The "LEOSA Reform Act" would amend the Law Enforcement Officers' Safety Act(LEOSA), which exempts qualified active and retired law enforcement officers fromlocal and State prohibitions on the carriage of concealed firearms, to ensure thatthese officers are able to carry in the same venues as civilian concealed carrypermit holders in areas like schools and national parks, as well as use publictransportation and extends the exemption to magazine capacity and would allowactive and retired law enforcement officers to access services at U.S. post offices,Social Security Administration offices or Veterans Affairs facilities.COSPONSORS220S. 1610COSPONSORS53541H.R. 1210The "Protect and Serve Act" would make it a Federal crime to target a lawenforcement officer with an assault that results in seriously bodily harm or death.COSPONSORS23230S. 774COSPONSORS61676H.R. 3079MORE RESOURCES ON OUR LEGISLATIVE PRIORITIESFULL LIST OF LEGISLATION SUPPORTED BY THE FOP+2 NEW

THE BLUE VIEWby the National Fraternal Order of PoliceEach week, National President Patrick Yoes sits down witha guest discuss the issues and current events surroundingthe law enforcement community.Make sure to tune in, as you'll hear law enforcementexperts, elected officials, and other notable leaders!ATTACKS ON POLICE AND THEDEMONIZATION OF LAW ENFORCEMENT Featuring Joe Gamaldi and James SmallwoodNational President Patrick Yoes sits down with NationalVice President Joe Gamaldi and National TreasurerJames Smallwood to discuss the alarming increase ofviolence against the police and the demonization of ourlaw enforcement officers.EPISODE #002NEXT WEEK | TUESDAY, 22 FEBRUARYWHAT'S NEXT FOR AMERICA'S LAWENFORCEMENT OFFICERS?Featuring Jim PascoNational President Patrick Yoes sat down withExecutive Director Jim Pasco to discuss what is beingdone in Washington, D.C. to reform policing so that thepartnership between our communities and the officersthat protect them can be restored.EPISODE #001TUESDAY, 15 FEBRUARYSUBSCRIBE

CAN YOU CHIP IN $5?DONATEClick HereThe Fraternal Order of Police is committed to improving the workingconditions of law enforcement officers and the safety of those weserve through education, legislation, information, communityinvolvement, and employee representation. The National FOP PAC is the power behind our organization's punchon Capitol Hill, representing its members in the most effective waypossible.Our challenge to you is to have each and every FOP member in yourdepartment, lodge, and State commit $5.00 a month to the NFOPPAC. Please contact the National Legislative Office to learn aboutthe various ways you can contribute to the NFOP PAC. DONATEClick Here