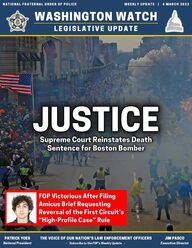 Executive Director Jim Pasco gave numerous media interviews in regard tocriminal justice reform, the nationwide increase in violent crime, and therecent Supreme Court nomination of Judge Ketanji Brown Jackson.Executive Director Jim Pasco also gave numerous media interviewspertaining to the COVID-19 pandemic, vaccinations, and their impact on publicsafety. The National FOP believes in the science behind the COVID-19vaccines and that vaccinations work to prevent people from becominginfected by or transmitting COVID-19. However, the National FOP continues tobelieve that whether or not to accept the vaccine is a personal decision. Executive Director Jim Pasco spoke with Vanessa Chen, Special Assistant tothe President for Criminal Justice, regarding criminal justice reform and thesurge in violent crime across the country.Legislative Liaison David Taboh spoke with staff in the office ofRepresentative David J. Trone (D-MD) regarding new language the FOPhelped draft that amends H.R. 3071, the “Public Safety Officer Support Act.”Legislative Liaison David Taboh spoke with staff in the office ofRepresentative Abigail A. Spanberger (D-VA) to discuss H.R. 82, the “SocialSecurity Fairness Act.”

THE WHITE HOUSEEarlier this week, President Joseph R. Biden, Jr. addressed the nation in hisfirst State of the Union speech. In his speech, the President discussed hisrecent nomination of Judge Ketanji Brown Jackson to replace AssociateJustice Stephen G. Breyer. President Biden referenced the opinion of theNational FOP and the impact it had on his final decision.President Biden went on to address the importance of investing in lawenforcement and community policing, calling on lawmakers to work together toprotect our communities, restore trust, and hold law enforcement accountable.President Biden highlighted the work done by the U.S. Department of Justice torequire body cameras, ban chokeholds, and restrict no-knock warrants.President Biden pushed back against the Defund the Police Movement, claimingthat it is not the answer to the problems facing public safety. Instead, the goalshould be to fund the police with the resources and training needed to properlyprotect the public.

THE U.S. HOUSE OF REPRESENTATIVESThe House Committee on Transportation and Infrastructure favorablyreported on a voice vote H. Con. Res. 74. This concurrent resolution wouldauthorize the use of the Capitol Grounds for the National Peace Officers'Memorial Service, the National Honor Guard, and the Pipe Band Exhibition on15 May 2022. H. Con. Res. 74 will now advance to the House floor for a vote.The House Committee on Homeland Security's Subcommittee on BorderSecurity, Facilitation, and Operations held a hearing entitled "Examining theCourt-Ordered Reimplementation of the Remain in Mexico Policy." Thishearing examined the Trump-era security policy and the rising crisis at oursouthern border. Providing testimony at the hearing was Acting ChiefOperating Officer Benjamine Huffman of the U.S. Customs and BorderProtection, within the U.S. Department of Homeland Security. Members of the U.S. House of Representatives were given a classifiedbriefing regarding the Russian invasion of Ukraine. Topics included thepotential timeline, the amount of Russian troops, and how long Ukraine couldhold out.

The Senate Committee on Commerce, Science, and Transportation held anexecutive session on numerous nominations. During this session thecommittee voted on the nomination of Gigi B. Sohn, President Biden’snominee for the open Commissioner seat on the Federal CommunicationsCommission (FCC). Ms. Sohn was favorably reported to the Senate floorfollowing a 14-14 vote. The National FOP has continued to oppose thenomination of Ms. Sohn because, as a board member for Electronic FrontierFoundation (EFF), she was part of a forceful advocacy campaign promotingend-to-end encryption and opposing “lawful access” by law enforcement.These new encryption methods are causing law enforcement agencies torapidly lose the capability to obtain digital evidence necessary to protect thepublic from crime and violence.THE UNITED STATES SENATEThe Senate Committee on Judiciary held a hearing entitled "Federal Supportfor Preventing and Responding to Carjackings." Examined at this hearing wasthe rise in violent crimes, particularly carjackings and the use of violence tosteal a vehicle. Providing testimony at the hearing were numerous individualsfrom law enforcement agencies and other relevant associations.The Senate Committee on Judiciary held a hearing on numerous judicialnominations. The nominees were questioned and were carried over for afuture vote at an undisclosed date.

COSPONSORS67260193H.R. 82The “Law Enforcement Officers’ Equity Act" would expand the definition of "lawenforcement officer" for salary and retirement benefits to include all Federal lawenforcement officers.The “Public Safety Employer-Employee Cooperation Act” would recognize theright of law enforcement and other public safety officers to bargain collectivelywith their employers.COSPONSORS103121H.R. 3225COSPONSORS121S. 1888NOT YET INTRODUCED IN THE SENATECOSPONSORS228664H.R. 962COSPONSORS43834S. 1302+4 NEWThe “Social Security Fairness Act” would repeal both the "Windfall EliminationProvision" and the "Government Pension Offset" in current Social Security law.+1 NEW

The "LEOSA Reform Act" would amend the Law Enforcement Officers' Safety Act(LEOSA), exempts qualified active and retired law enforcement officers fromlocal and State prohibitions on the carriage of concealed firearms, to ensure thatthese officers are able to carry in the same venues as civilian concealed carrypermit holders in areas like schools and national parks, as well as use publictransportation and extends the exemption to magazine capacity and would allowactive and retired law enforcement officers to access services at U.S. postoffices, Social Security Administration offices or Veterans Affairs facilities.COSPONSORS220S. 1610COSPONSORS55561H.R. 1210The "Protect and Serve Act" would make it a Federal crime to target a lawenforcement officer with an assault that results in seriously bodily harm or death.COSPONSORS23230S. 774COSPONSORS63696H.R. 3079MORE RESOURCES ON OUR LEGISLATIVE PRIORITIESFULL LIST OF LEGISLATION SUPPORTED BY THE FOP+2 NEW

The National Fraternal Order of Police reportsthat as of midnight on 28 February, there havebeen 67 officers shot in the line of duty so farin 2022 (+40% from 2021 YTD; +76 from 2020YTD)...MOREFOP Monthly Update: Officers Shot andKilledWe have received several inquiries about theprocess which led to the National FOP issuing astatement regarding the nomination of KetanjiBrown Jackson to the Supreme Court...MOREStatement from National FOP PresidentPatrick Yoes to Members of the FOPNationwideThe United States Senate Committee onCommerce, Science, and Transportation hasannounced that it will be convening tomorrowon March 3rd, 2022 to consider the nominationof Gigi B. Sohn to be a Commissioner...MOREGigi Sohn FOP Research AnalysisPatrick Yoes, National President of theFraternal Order of Police, applauded the newstoday that the Supreme Court of the UnitedStates has reinstated...MORENational FOP President ApplaudsSCOTUS Decision in Boston MarathonBomber Case

CAN YOU CHIP IN $5?DONATEClick HereThe Fraternal Order of Police is committed to improving the workingconditions of law enforcement officers and the safety of those we servethrough education, legislation, information, community involvement, andemployee representation. The National FOP PAC is the power behind our organization's punch onCapitol Hill, representing its members in the most effective way possible.Our challenge to you is to have each and every FOP member in yourdepartment, lodge, and State commit $5.00 a month to the NFOP PAC.Please contact the National Legislative Office to learn about the variousways you can contribute to the NFOP PAC. DONATEClick Here