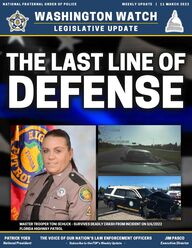 Executive Director Jim Pasco gave numerous media interviews in regard tocriminal justice reform, the nationwide increase in violent crime, the need forfurther police funding, and staffing issues at the State and local level. Executive Director Jim Pasco also gave numerous media interviewspertaining to the COVID-19 pandemic, vaccinations, and their impact on publicsafety. The National FOP believes in the science behind the COVID-19vaccines and that vaccinations work to prevent people from becominginfected by or transmitting COVID-19. However, the National FOP continues tobelieve that whether or not to accept the vaccine is a personal decision. Executive Director Jim Pasco spoke with Marvin Richardson, Acting Directorof the Bureau of Alcohol, Tobacco, Firearms and Explosives (ATF), regardingthe impact that ATF task forces have had on violent crime. Executive Director Jim Pasco spoke with Heather Fong, Counselor to theSecretary of Homeland Security, regarding the impact of recent reportsgenerated by the U.S. Department of Homeland Security (DHS) on domesticterrorism issues.Senior Legislative Liaison Tim Richardson spoke with staff in the office ofSenator Cory A. Booker (D-NJ) regarding draft legislation entitled the “ViolentIncident Clearance and Technological Investigative Methods (VICTIM) Act,”which is intended to be the Senate companion to H.R. 5768, which the FOPsupports.

THE U.S. HOUSE OF REPRESENTATIVESThe House Committee on Judiciary's Subcommittee on Crime, Terrorism,and Homeland Security held a hearing entitled "Reimagining Public Safety inthe COVID-19 Era." This hearing covered the challenges that COVID-19 hascreated and how law enforcement has adapted to face these obstacles.Providing testimony at the hearing was Eddie Garcia, Chief of Police for theDallas Police Department. The House passed H. Res. 973, on a 218-204 vote. This resolution includedH. J. Res. 75, which provided short-term funding to keep Federal agenciesrunning at the fiscal year 2021 level until 15 March 2022. This was done incase a government spending package could not be passed by the 11 March2022 deadline. Included in H. J. Res. 75 was an extension of the temporaryscheduling order issued by the U.S. Drug Enforcement Administration (DEA)to place illicit fentanyl and fentanyl-related substances in Schedule 1 of theControlled Substances Act. This order has been extended numerous times inthe past, and the National FOP has consistently called on Congress topermanently schedule these illicit drugs and their analogues.

THE UNITED STATES SENATEThe Senate Committee on Judiciary held a hearing entitled "Combating theRise in Hate Crimes." At this hearing the increase of these attacks wasdiscussed and the impact they have had on local law enforcement. Providingtestimony at the hearing was Kristen M. Clarke, Assistant Attorney General,and Orlando Martinez, Detective from the Los Angeles Police Department.The Senate passed H.R. 2471, the omnibus spending bill for fiscal year 2022,on a 68-31 vote. This $1.5 trillion omnibus spending bill, will keep Federalagencies open until 30 September 2022 and would avoid a governmentshutdown that was set to start on 11 March 2022. This bill will provide $75.8billion in funding for Commerce, Justice, Science, and other related agencies.In particular, there will be $35.2 billion funding overall for the U.S. Departmentof Justice (DOJ), which is a $1.4 billion increase from the fiscal year 2021enacted level. This bill was passed in the House earlier in the week and willnow head to the President's desk for signing.

COSPONSORS67262195H.R. 82The “Law Enforcement Officers’ Equity Act" would expand the definition of "lawenforcement officer" for salary and retirement benefits to include all Federal lawenforcement officers.The “Public Safety Employer-Employee Cooperation Act” would recognize theright of law enforcement and other public safety officers to bargain collectivelywith their employers.COSPONSORS103121H.R. 3225COSPONSORS121S. 1888NOT YET INTRODUCED IN THE SENATECOSPONSORS228664H.R. 962COSPONSORS43834S. 1302+2 NEWThe “Social Security Fairness Act” would repeal both the "Windfall EliminationProvision" and the "Government Pension Offset" in current Social Security law.

The "LEOSA Reform Act" would amend the Law Enforcement Officers' Safety Act(LEOSA), exempts qualified active and retired law enforcement officers fromlocal and State prohibitions on the carriage of concealed firearms, to ensure thatthese officers are able to carry in the same venues as civilian concealed carrypermit holders in areas like schools and national parks, as well as use publictransportation and extends the exemption to magazine capacity and would allowactive and retired law enforcement officers to access services at U.S. postoffices, Social Security Administration offices or Veterans Affairs facilities.COSPONSORS220S. 1610COSPONSORS56571H.R. 1210The "Protect and Serve Act" would make it a Federal crime to target a lawenforcement officer with an assault that results in seriously bodily harm or death.COSPONSORS23230S. 774COSPONSORS65716H.R. 3079MORE RESOURCES ON OUR LEGISLATIVE PRIORITIESFULL LIST OF LEGISLATION SUPPORTED BY THE FOP+2 NEW+1 NEW

SUBSCRIBEWHO’S FIGHTING FOR AMERICA’S LAWENFORCEMENT?Featuring Joe Gamaldi and James SmallwoodNational President Patrick Yoes sits down with NationalVice President Joe Gamaldi and National TreasurerJames Smallwood to discuss how the FOP is speakingup and fighting for our members, especially during oneof the most dangerous times for law enforcement.EPISODE #003TUESDAY, 1 MARCHTHE BLUE VIEWby the National Fraternal Order of PoliceEach week, National President Patrick Yoes sits downwith a guest discuss the issues and current eventssurrounding the law enforcement community.Make sure to tune in, as you'll hear law enforcementexperts, elected officials, and other notable leaders!THIS IS ABOUT FAIRNESSFeaturing Representative Rodney DavisNational President Patrick Yoes sits down withRepresentative Rodney L. Davis, one of the leadingsponsors for H.R. 82, the "Social Security FairnessAct," to discuss the importance of this bill and otherissues facing the men and women of law enforcement.EPISODE #004TUESDAY, 8 MARCH

CAN YOU CHIP IN $5?DONATEClick HereThe Fraternal Order of Police is committed to improving the workingconditions of law enforcement officers and the safety of those we servethrough education, legislation, information, community involvement, andemployee representation. The National FOP PAC is the power behind our organization's punch onCapitol Hill, representing its members in the most effective way possible.Our challenge to you is to have each and every FOP member in yourdepartment, lodge, and State commit $5.00 a month to the NFOP PAC.Please contact the National Legislative Office to learn about the variousways you can contribute to the NFOP PAC. DONATEClick Here