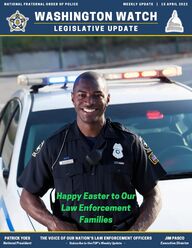 L I S T E N   T O   E P I S O D ECLICK TO SUBSCRIBENational President Patrick Yoes and Executive Director Jim Pasco attended aWhite House press conference at which President Joseph R. Biden Jr.,addressed the importance of a recent rulemaking by the U.S. Department ofJustice (DOJ) to address the issue of "ghost guns". At this same event, thePresident also nominated Steven M. Dettelbach, a former U.S. Attorney, to bethe next Director of the Bureau of Alcohol, Tobacco, Firearms and Explosives(ATF).On this week's episode of the Blue View, National President Patrick Yoes satdown with Representative John H. Rutherford (R-FL) to discuss his lawenforcement career, how Congress is tackling some of the most pressingissues facing the law enforcement community, and the rise in violent crime.From everyone at the National FOP's Government and Media Affairs Center,Happy Easter to all our law enforcement families! Thank you for your serviceand everything that you do to keep the public safe.

THE U.S. DEPARTMENT OF JUSTICEThe U.S. Department of Justice announced this week that it has submitted a"Frame or Receiver" final rule to the Federal Register. Once implemented, thisrule would modernize the definition of a firearm and clarify that parts kits thatare readily convertible to firearms are subject to the same regulations astraditional firearms. This rule would go into effect 120 days after the date ofpublication, U.S. Attorney General Merrick B. Garland made the followingstatement on the proposed rule change:“This rule will make it harder for criminals and other prohibited persons toobtain untraceable guns, will help ensure that law enforcement officers canretrieve the information they need to solve crimes, and will help reduce thenumber of untraceable firearms flooding our communities. I commend all ourcolleagues at the ATF who have worked tirelessly over the past 12 months toget this important rule finalized, and to do it in a way that respects the rights oflaw-abiding Americans.” For context, local and State law enforcement recovered and reported 45,240firearms that they suspected were privately made—including 692 related tohomicide or attempted homicide investigations.

COSPONSORS72269197H.R. 82The “Law Enforcement Officers’ Equity Act" would expand the definition of "lawenforcement officer" for salary and retirement benefits to include all Federal lawenforcement officers.The “Public Safety Employer-Employee Cooperation Act” would recognize theright of law enforcement and other public safety officers to bargain collectivelywith their employers.COSPONSORS103222H.R. 3225COSPONSORS132S. 1888NOT YET INTRODUCED IN THE SENATECOSPONSORS239370H.R. 962COSPONSORS43935S. 1302The “Social Security Fairness Act” would repeal both the "Windfall EliminationProvision" and the "Government Pension Offset" in current Social Security law.

The "LEOSA Reform Act" would amend the Law Enforcement Officers' Safety Act(LEOSA), exempts qualified active and retired law enforcement officers fromlocal and State prohibitions on the carriage of concealed firearms, to ensure thatthese officers are able to carry in the same venues as civilian concealed carrypermit holders in areas like schools and national parks, as well as use publictransportation and extends the exemption to magazine capacity and would allowactive and retired law enforcement officers to access services at U.S. postoffices, Social Security Administration offices or Veterans Affairs facilities.COSPONSORS220S. 1610COSPONSORS57581H.R. 1210The "Protect and Serve Act" would make it a Federal crime to target a lawenforcement officer with an assault that results in seriously bodily harm or death.COSPONSORS23230S. 774COSPONSORS67736H.R. 3079MORE RESOURCES ON OUR LEGISLATIVE PRIORITIESFULL LIST OF LEGISLATION SUPPORTED BY THE FOP

SUBSCRIBECHARM CITY CRIME CRISISFeaturing Clyde Boatwright + Mike MancusoOn December 16th of last year—in a city that has beenravaged by crime and with a police department that isshort upwards of 400 officers—Baltimore City PoliceOfficer Keona Holley was gunned down as she sat in herpatrol car. So far this year, there have been two officersshot in Maryland, a state where countless... MOREEPISODE #008TUESDAY, 5 APRILTHE BLUE VIEWby the National Fraternal Order of PoliceNational President Patrick Yoes sits down withguests to discuss the issues and current eventssurrounding the law enforcement community.Each week you'll hear from law enforcementexperts, elected officials, and notable leaders!THERE'S A NEW SHERIFF IN TOWNFeaturing Representative John RutherfordOn this episode of the Blue View, National PresidentPatrick Yoes sits down with Congressman JohnRutherford (FL-04) to discuss his law enforcementbackground, how Congress is tackling some of the mostpressing issues facing the law enforcement community,and the rise in violent crime... MOREEPISODE #009TUESDAY, 12 APRIL

A Phoenix police officer was shot at aconvenience store near Cave Creek andBeardsley Roads and the search for... MoreCarjacking suspect who shot 3 CPDofficers sentenced to 31 years [WGN9]Man identified as suspect in 2003shooting of Texas officer [KWTX 10]A convicted felon who pleaded guilty to chargesthat he opened fire on police in 2020, woundingthree officers, was sentenced Monday... MoreAlmost 20 years after a North Texas policeofficer was shot and injured by a man who hadjust robbed a bank, authorities say they usedDNA to identify the suspect, who was... MoreManhunt underway for suspect in northPhoenix officer-involved shooting [FOX10 Phoenix]The man arrested after a roughly 30-hourmanhunt in the shooting of 10 people on asubway train in Brooklyn was denied bail at hisinitial court appearance Thursday... MoreSubway shooting suspect denied bail onfederal terrorism-related charge [CNN]

Been Exposed?Are You Sick?READ MOREVIEW A STATE-BY-STATE BREAKDOWNCOVID-19 Information for Law EnforcementProtecting Public Safety and HealthFRATERNAL ORDER OF POLICEWWW.FOPCOVID19.ORGAs COVID cases have declined and restrictions have been eased, there have beenfewer newsworthy developments regarding the state of the pandemic and availableresources germane to law enforcement. For this reason, this website will no longer beupdated on a regular basis, but we will certainly provide any new and relevantinformation as it becomes available.APRIL 5READ MORE READ MORE

DONATEClick HereDONATEClick HereCAN YOU CHIP IN $5?The Fraternal Order of Police is committed to improving the workingconditions of law enforcement officers and the safety of those we servethrough education, legislation, information, community involvement, andemployee representation. The National FOP PAC is the power behind our organization's punch onCapitol Hill, representing its members in the most effective way possible.Our challenge to you is to have each and every FOP member in yourdepartment, lodge, and State commit $5.00 a month to the NFOP PAC.Please contact the National Legislative Office to learn about the variousways you can contribute to the NFOP PAC.