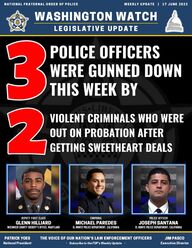 THE U.S. HOUSE OF REPRESENTATIVESThe House Committee on Natural Resources favorably reported H.R. 263, the "BigCat Public Safety Act," as amended, on a 25-17 vote. The bill, which wouldprohibit private individuals from possessing lions, tigers, leopards, cheetahs,jaguars or cougars, will now go to the House for a full vote. The FOP supports.[25-14 vote] H.R. 5768, the "Violent Incident Clearance and TechnologicalInvestigative Methods (VICTIM) Act," would establish a grant programadministered by the U.S. Department of Justice (DOJ) to help State, Tribal, andlocal law enforcement agencies improve their clearance rates for homicides andnon-fatal shootings; and[Voice vote] H.R. 6538, the "Active Shooter Alert Act," would establish a nationalcoordinator within the U.S. Department of Justice (DOJ) to establish andadminister an Active Shooter Alert Communications Network.The House Committee on Judiciary held a markup for numerous FOP-supportedbills. These bills were favorably reported and will now be sent to the House floorfor a vote:The House passed S. 4160, the "Supreme Court Police Parity Act," on a 396-27vote. This bill would provide police protection to the immediate families ofJustices on the Supreme Court of the United States (SCOTUS). This protectionwould be determined necessary by the Marshal of the Supreme Court. This billpassed the Senate in May, but it was delayed in passing the House in its currentform. The bill will now be sent to the President's desk to be signed into law.

THE UNITED STATES SENATEThe Senate Committee on Judiciary held a hearing entitled "ProtectingAmerica’s Children From Gun Violence." This hearing examined potentialFederal solutions to counter future instances of firearm violence impactingchildren at schools. Providing testimony at this hearing was Jeri L. Williams,Chief of Police for the Phoenix Police Department, among other relevantstakeholders.The Senate Committee on Judiciary held an executive business meeting tovote on numerous nominations including the nomination of Steven M.Dettelbach to be the next Director of the Bureau of Alcohol, Tobacco,Firearms and Explosives (ATF). The Committee failed to favorably report thisnomination on an 11-11 vote, however the nomination was discharged on a52-41 vote and will now head to the Senate floor for a full vote. The Senate Appropriations' Subcommittee on Financial Services and GeneralGovernment held a hearing entitled "Fiscal Year 2023 Budget Request for theTreasury Office of Terrorism and Financial Intelligence, and the TreasuryFinancial Crimes Enforcement Network."The Senate Committee on Appropriations' Subcommittee on Labor, Healthand Human Services, Education, and Related Agencies held a hearingentitled "Fiscal Year 2023 Budget Request for the United States Departmentof Labor."

COSPONSORS76279203H.R. 82The “Law Enforcement Officers’ Equity Act" would expand the definition of "lawenforcement officer" for salary and retirement benefits to include all Federal lawenforcement officers.The “Public Safety Employer-Employee Cooperation Act” would recognize theright of law enforcement and other public safety officers to bargain collectivelywith their employers.COSPONSORS103222H.R. 3225COSPONSORS143S. 1888NOT YET INTRODUCED IN THE SENATECOSPONSORS2510277H.R. 962COSPONSORS44036S. 1302The “Social Security Fairness Act” would repeal both the "Windfall EliminationProvision" and the "Government Pension Offset" in current Social Security law.

The "LEOSA Reform Act" would amend the Law Enforcement Officers' Safety Act(LEOSA), exempts qualified active and retired law enforcement officers fromlocal and State prohibitions on the carriage of concealed firearms, to ensure thatthese officers are able to carry in the same venues as civilian concealed carrypermit holders in areas like schools and national parks, as well as use publictransportation and extends the exemption to magazine capacity and would allowactive and retired law enforcement officers to access services at U.S. postoffices, Social Security Administration offices or Veterans Affairs facilities.COSPONSORS220S. 1610COSPONSORS57581H.R. 1210The "Protect and Serve Act" would make it a Federal crime to target a lawenforcement officer with an assault that results in seriously bodily harm or death.COSPONSORS23230S. 774COSPONSORS80866H.R. 3079MORE RESOURCES ON OUR LEGISLATIVE PRIORITIESFULL LIST OF LEGISLATION SUPPORTED BY THE FOP

Been Exposed?Are You Sick?VIEW A STATE-BY-STATE BREAKDOWNCOVID-19 Information for Law EnforcementProtecting Public Safety and HealthFRATERNAL ORDER OF POLICEW W W .FOPCOVID19.ORGOFFICERS HAVE DIED DUE TO COVID-19AS OF 17 JUNE 2022READ MORE READ MOREREAD MOREAs COVID cases have declined and restrictions have been eased, there havebeen fewer newsworthy developments regarding the state of the pandemicand available resources germane to law enforcement. For this reason, thiswebsite will no longer be updated on a regular basis, but we will certainlyprovide any new and relevant information as it becomes available.JUNE 17

DONATEClick HereDONATEClick HereCAN YOU CHIP IN $5?The Fraternal Order of Police is committed to improving the workingconditions of law enforcement officers and the safety of those we servethrough education, legislation, information, community involvement, andemployee representation. The National FOP PAC is the power behind our organization's punch onCapitol Hill, representing its members in the most effective way possible.Our challenge to you is to have each and every FOP member in yourdepartment, lodge, and State commit $5.00 a month to the NFOP PAC.Please contact the National Legislative Office to learn about the variousways you can contribute to the NFOP PAC.