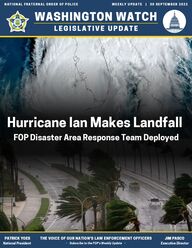 @GLFOP@FOPNATIONALNATIONAL FRATERNAL ORDER OF POLICETHI S WEE K IN W A SHI N G TONTHE U.S. HOUSE OF REPRESENTATIVESThe House considered and passed H.R. 6833, the Continuing Appropriationsand Ukraine Supplemental Appropriations Act, on an 230-201 vote. The billwill fund the Federal government through December 16th as well as provideadditional monetary and material support for Ukraine. If the bill had notpassed, parts of the government would have shut down Friday at midnight.The bill now goes to the President, who will sign it into law today.The House considered and passed H.R. 8987, the “Fairness for 9/11 FamiliesAct,” on a 400-31 vote. The bill authorizes the Justice Department to issuelump-sump "catch-up" payments to 9/11 survivors, spouses, and dependentswho are eligible for claims from the Victims of State Sponsored TerrorismFund, but who have been unable to receive compensation from those statessponsors of terror. The bill now awaits action in the Senate.The House considered and passed H.R. 7780, the “Mental Health MattersAct,” on a 220-205 vote. The bill, which provide grants to establish a pipelinefor school-based mental health professionals, now goes to the Senate forfurther consideration.

@GLFOP@FOPNATIONALNATIONAL FRATERNAL ORDER OF POLICETHI S WEE K IN W A SHI N G TONTHE UNITED STATES SENATEThe Senate Committee on the Judiciary held a hearing entitled "Oversight ofthe Federal Bureau of Prisons." Providing testimony at the hearing wasColette S. Peters, Director of the Federal Bureau of Prisons.The Senate Committee on Judiciary held an executive business meeting toconsider numerous judicial nominations and pending legislation.The Senate passed H.R. 6833, the Continuing Appropriations and UkraineSupplemental Appropriations Act, on a 75-25 vote. The bill will fund theFederal government through December 16th as well as provide additionalmonetary and material support for Ukraine. If the bill had not passed, parts ofthe government would have shut down Friday at midnight.

@GLFOP@FOPNATIONALNATIONAL FRATERNAL ORDER OF POLICEThe "LEOSA Reform Act" would amend the Law Enforcement Officers' Safety Act(LEOSA), exempts qualified active and retired law enforcement officers fromlocal and State prohibitions on the carriage of concealed firearms, to ensure thatthese officers are able to carry in the same venues as civilian concealed carrypermit holders in areas like schools and national parks, as well as use publictransportation and extends the exemption to magazine capacity and would allowactive and retired law enforcement officers to access services at U.S. postoffices, Social Security Administration offices or Veterans Affairs facilities.LEOSA REFORMCOSPONSORS220S. 1610COSPONSORS58591H.R. 1210PROTECT AND SERVEThe "Protect and Serve Act" would make it a Federal crime to target a lawenforcement officer with an assault that results in seriously bodily harm or death.COSPONSORS23230S. 774COSPONSORS81898H.R. 3079MORE RESOURCES ON OUR LEGISLATIVE PRIORITIESFULL LIST OF LEGISLATION SUPPORTED BY THE FOPLEG I S LAT I V E P R I ORI T I ES

Been Exposed?Are You Sick?VIEW A STATE-BY-STATE BREAKDOWNCOVID-19 Information for Law EnforcementProtecting Public Safety and HealthFRATERNAL ORDER OF POLICEW W W .F O PC O VI D 1 9 . O R GOFFICERS HAVE DIED DUE TO COVID-19AS OF 30 SEPTEMBER 2022COVID-19 VaccineMandates in PublicSector EmploymentQUESTIONS & ANSWERSREAD MORE READ MOREPOLICY STATEMENTCOVID-19 VaccineRequirements andMandates@GLFOP@FOPNATIONALNATIONAL FRATERNAL ORDER OF POLICECOV I D -19 A CTI V I TYREAD MOREAs COVID cases have declined and restrictions have been eased, there havebeen fewer newsworthy developments regarding the state of the pandemicand available resources germane to law enforcement. For this reason, thiswebsite will no longer be updated on a regular basis, but we will certainlyprovide any new and relevant information as it becomes available.30 SEPTEMBER

@GLFOP@FOPNATIONALNATIONAL FRATERNAL ORDER OF POLICEDONATEClick HereDONATEClick HerePOL I T ICA L ACT I O N C O M MIT T E ECAN YOU CHIP IN $5?The Fraternal Order of Police is committed to improving the workingconditions of law enforcement officers and the safety of those we servethrough education, legislation, information, community involvement, andemployee representation. The National FOP PAC is the power behind our organization's punch onCapitol Hill, representing its members in the most effective way possible.Our challenge to you is to have each and every FOP member in yourdepartment, lodge, and State commit $5.00 a month to the NFOP PAC.Please contact the National Legislative Office to learn about the variousways you can contribute to the NFOP PAC.