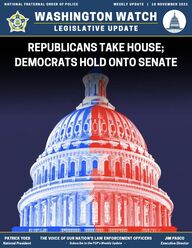 @GLFOP@FOPNATIONALNATIONAL FRATERNAL ORDER OF POLICELEG I S LAT I V E N E W S & A CTI V I TYNational President Patrick Yoes worked out of the National Headquarters inNashville, TN this week.National President Patrick Yoes participated in a virtual meeting of theNational FOP's Board of Trustees.National President Patrick Yoes participated in a briefing from Kenneth L.Wainstein, Under Secretary for Intelligence and Analysis in the U.S.Department of Homeland Security, regarding information sharing with localand State law enforcement agencies.National President Patrick Yoes gave numerous media interviews regardinglaw enforcement line-of-duty deaths, the increase of violence toward lawenforcement officers across the country, as well as the recruitment andretention crisis.The family of U.S. Capitol Police Officer Howard C. Liebengood, who took hisown life a few days after being on site on 6 January, the day an angry mobbroke into the U.S. Capitol, reached out to the National FOP to let us know thattheir death benefit claim was approved by the Public Safety Officers’ Benefit(PSOB) Program. While no amount of money will bring Howie back to hisfamily, it is an important acknowledgement of the fact that law enforcementsuicides are service-connected and should be seen for what they are—line ofduty deaths. Howie’s family will always be part of our family and we are happywith the outcome in the matter of this claim.

@GLFOP@FOPNATIONALNATIONAL FRATERNAL ORDER OF POLICETHI S WEE K IN W A SHI N G TONTHE U.S. HOUSE OF REPRESENTATIVESThe Committee on Homeland Security held an oversight hearing entitled“Worldwide Threats to the Homeland.” Alejandro N. Mayorkas, Secretary forthe U.S. Department of Homeland Security; Christopher A. Wray, Director ofthe Federal Bureau of Investigation; and Christine S. Abizaid, Director of theNational Counterterrorism Center in the Office of the Director of NationalIntelligence, all testified.The House Republican Caucus met to elect its leadership team.Representative Kevin O. McCarthy (R-CA) won the nomination to be the nextSpeaker of the House, which will be decided in January when the 118thCongress is sworn in.The Committee on Oversight and Reform held a hearing entitled“Developments in State Cannabis Laws and Bipartisan Cannabis Reforms atthe Federal Level.”House Speaker Nancy P. Pelosi and House Majority Leader Steny H. Hoyerannounced that they would not seek reelection for the House Democraticcaucus’s top leadership positions.

@GLFOP@FOPNATIONALNATIONAL FRATERNAL ORDER OF POLICETHI S WEE K IN W A SHI N G TONTHE UNITED STATES SENATEThe Senate invoked cloture on the motion to proceed to the consideration ofH.R. 8404, the “Respect for Marriage Act.”The Committee on the Judiciary considered numerous nominations for seatson Federal courts.The Committee on Homeland Security and Governmental Affairs held anoversight hearing entitled “Threats to the Homeland.” Alejandro N. Mayorkas,Secretary for the U.S. Department of Homeland Security; Christopher A. Wray,Director of the Federal Bureau of Investigation; and Christine S. Abizaid,Director of the National Counterterrorism Center in the Office of the Directorof National Intelligence, all testified.The Senate considered and passed H.R. 521, the “Fair Return for Employeeson Their Initial Retirement Earned (RETIRE) Act,” by unanimous consent. Thelegislation, which the FOP strongly supported, will allow Federal lawenforcement officers, who were severely injured in the line of duty and, as aresult, unable to continue their service as a law enforcement officer, tomaintain their 6(c) early retirement benefit provided they take a civil serviceposition after their injury. The measure is now on its way to the President whois expected to sign it into law.

@GLFOP@FOPNATIONALNATIONAL FRATERNAL ORDER OF POLICEThe "LEOSA Reform Act" would amend the Law Enforcement Officers' Safety Act(LEOSA), exempts qualified active and retired law enforcement officers fromlocal and State prohibitions on the carriage of concealed firearms, to ensure thatthese officers are able to carry in the same venues as civilian concealed carrypermit holders in areas like schools and national parks, as well as use publictransportation and extends the exemption to magazine capacity and would allowactive and retired law enforcement officers to access services at U.S. postoffices, Social Security Administration offices or Veterans Affairs facilities.LEOSA REFORMCOSPONSORS220S. 1610COSPONSORS58591H.R. 1210PROTECT AND SERVEThe "Protect and Serve Act" would make it a Federal crime to target a lawenforcement officer with an assault that results in seriously bodily harm or death.COSPONSORS23230S. 774COSPONSORS82908H.R. 3079MORE RESOURCES ON OUR LEGISLATIVE PRIORITIESFULL LIST OF LEGISLATION SUPPORTED BY THE FOPLEG I S LAT I V E P R I ORI T I ES+ 1 NEW

@GLFOP@FOPNATIONALNATIONAL FRATERNAL ORDER OF POLICEDONATEClick HereDONATEClick HerePOL I T ICA L ACT I O N C O M MIT T E ECAN YOU CHIP IN $5?The Fraternal Order of Police is committed to improving the workingconditions of law enforcement officers and the safety of those we servethrough education, legislation, information, community involvement, andemployee representation. The National FOP PAC is the power behind our organization's punch onCapitol Hill, representing its members in the most effective way possible.Our challenge to you is to have each and every FOP member in yourdepartment, lodge, and State commit $5.00 a month to the NFOP PAC.Please contact the National Legislative Office to learn about the variousways you can contribute to the NFOP PAC.